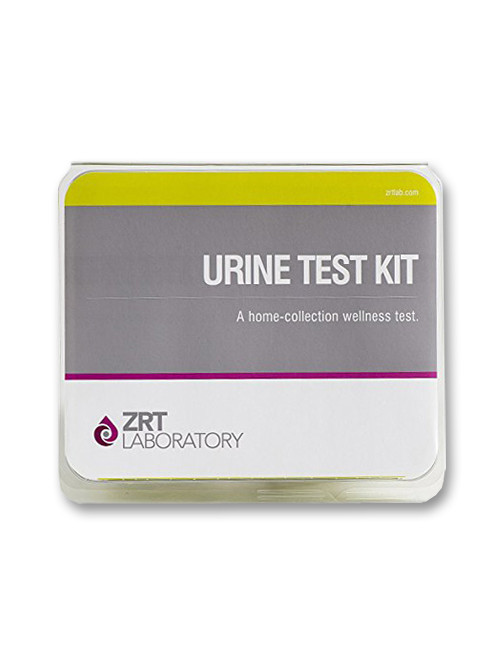 "I highly suggest everyone with a thyroid problem, and anyone taking or planning to take iodine take this test. I believe everyone should know their iodine levels regardless of having a thyroid problem or not. Iodine deficiency is very common. Iodine protects us from radiation, nuclear fallout, dangerous bromides that are commonly added to our food, and fluoride that is in our water and dental products. These things affect hormones and endocrine gland function. They are also known to promote many major illnesses. It is very important to have proper protective levels of iodine. Though too much can cause problems as well, therefore test before deciding to supplement with iodine."

Following a lengthy amount of research and development, ZRT Laboratory has introduced an innovative diagnostic test for measuring Iodine levels. This important test will be done in dried urine, which is a new, totally non-invasive technology developed by ZRT Laboratory.

Current scientific literature points to a significant amount of evidence that large numbers of the population may be deficient in Iodine. This growing concern is important to address, as Iodine is pivotal to the normal function of the thyroid gland, in addition to the health and integrity of breast tissue. In many instances, symptoms of hypothyroidism, fibrocystic breasts,fatigue and brain fog may actually be diagnosed as something other than Iodine deficiency,when in fact it could be the primary cause of these conditions.

Until now, collection of a sample to test Iodine levels has required a 24-hour urine collection that includes utilizing a bulky container to store the sample. To overcome this in convenience to a patient and practitioner, ZRT developed and refined Iodine testing in a dried urine collection. This method takes just a few minutes to collect urine on a filter strip two times a day. The specimen is then sent to ZRT for analysis of the Iodine content. Iodine levels determined in extracts of urine dried on filter paper are quantitatively equivalent to measurements in wet urine. ZRT utilizes what is known as the Sandell-Kolthoff method for its calculations, which shows highly significant correlations with ICP-Mass Spectrometry.

ZRT Laboratory participates in the CDC-sponsored EQUIP (Ensuring the Quality of Iodine Procedures) iodine standardization program, where multiple urine samples are tested for Iodine content and compared with values generated by ICP-MS at CDC and other laboratories performing iodine testing around the world (results available on request).

ZRT Laboratory, based in Beaverton Oregon, is an industry leader in wellness testing, through the use of cutting edge technologies. ZRT Laboratory provides saliva, blood spot and dried urine testing through a network of thousands of domestic and international medical providers specializing in health and hormone wellness.

How Iodine May Protect You from Radiation Damage by Anne Dunev

While scientists debate the dangers of the increased radiation airline travelers are being exposed to, and government officials dismiss concerns, there is little question that it is babies, children and those with compromised immune systems who are at risk.

Those at greatest risk also include cancer patients, anyone over the age of 65, pregnant women and HIV-positive patients. According to a study from Los Alamos National Laboratory, terahertz wave radiation (THz) emitted by the new scanners creates effects that may interfere with DNA replication. And a study in the journal Radiation Research concluded that THz radiation causes DNA instability.

The adult human body makes a billion new cells an hour. Ideally each one of these cells is a perfect replication of a perfect parent cell. DNA damage means that the code to manufacture the new generation of cells is altered.

So, there can be no liability in everyone guarding against extra radiation exposure. Radiation does cause cancer. How much radiation a person can handle without developing cancer is very individual.

Eyes, skin and blood cells may be most susceptible to damage from the TSA scanners. The thyroid gland is also very susceptible to radiation. The thyroid will uptake radiation instead of iodine, which damages the cells of the thyroid. The thyroid is key to the endocrine system of the body, working in harmony with the other glands to regulate all systems. Low thyroid function is linked to depression, infertility and immune problems.

You can help protect yourself and your loved ones by ensuring that you have enough iodine in your diet. Iodized table salt is not ideal. Table salt is from underground mines and is processed to remove all trace elements so that only sodium chloride is left. Sea salt contains 80 trace elements, in addition to the mineral sodium chloride. It is always better to use a nutrient that is not isolated, as you never find high doses of single nutrients occurring in nature.

The best sources of iodine may be protein bound. Look for kelp or seaweed supplements. It's best to start iodine supplementation slowly and build up to a higher dose.
Iodine is concentrated in the skin, and in the thyroid gland. The thyroid must have iodine to make thyroxin, the main thyroid hormone. Iodine has been shown to be protective against breast and prostate cancer. Iodine in the breast tissue may buffer estrogen.

Iodine can help protect eyes against UVB radiation. Iodine has been shown to be vital for the heart, as thyroid hormones help regulate the heart. In some cases, severe iodine deficiency causes mental retardation called Cretinism, and iodine deficiency may be causative in other types of retardation.

Iodine is one of the best antiseptics, and is used daily in medicine for surgery to create a sterile field. It can also be used on cuts and to sterilize water.

The amount of iodine needed by adults is about 200 micrograms, so don't overdo supplementation. But having sufficient iodine can help protect your body against many types of radiation. The incidence of thyroid cancer was off the charts after the Chernobyl nuclear disaster. Neighboring Poland dispensed iodine supplements, and avoided the devastation.
So, if you are undecided about choosing to be scanned or groped, at least you can be proactive about your health by ensuring you have sufficient iodine to help offset the radiation.

These statements have not been evaluated by the Food and Drug Administration. This product is not intended to diagnose, treat, cure, or prevent any disease.