We tend to think that the brain has ultimate jurisdiction over everything that goes on in our bodies, but enter the enteric nervous system, dubbed our second brain. The Enteric Nervous System (ENS) is made up of neurons and nerve cells that line the gut; it contains the same amount of nerve cells as the spinal cord, 90% of the serotonin and 50% of the dopamine in the body. The ENS governs functions in the gut such as the absorption, digestion, and movement of consumed material from one end of the gut to the other.

The gut and ENS communicate with the brain through the vagus nerve. Almost counter intuitively, 90% of the signals sent via the vagus nerve are sent to the brain from the ENS. (That’s a lot of information that our gut is giving our brains!) Even in cases where the vagus nerve is severed (thus causing communication between the brain and the gut/enteric system to be dissolved), the gut is still able to perform all of its operations. 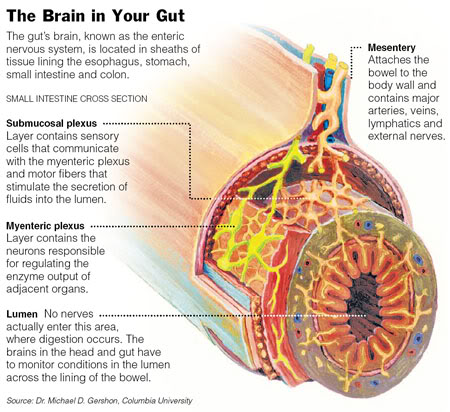 All of this information is really cool, but why is our gut considered our ‘second brain’? The gut (and ENS) is responsible for one of the most important functions our body does, turning the environment around us into usable energy-without this operation we would simply cease to exist. It’s the guts ability to function independently from our brain that ensures the continuation of the operation most essential to our survival. 2 The nature of the relationship between the brain and the gut is in constant revelation; here are some things you may want to know about this relationship:

Signals from the gut to the brain seem to affect mood. Studies demonstrate that stimulation of the vagus nerve can be a tool in treating depression.4 In addition, during a recent study subjects received intragastric infusions of either a saline solution or a solution of fatty acids. The subjects that received the infusion of fatty acids were more resistant to sad emotion cues (such as music and pictures) than their saline-receiving counterparts. Fatty acids consumed from our food source is detected by receptors in the stomach/gut lining and feel-good nerve signals are sent to the brain, supposedly counteracting cues of sadness.6

Stop stressin’ cause you’re messin’ with your appetite!

Stress causes the gut to increase its production of the hormone ghrelin. Ghrelin is awesome because it reduces those feelings of anxiety and depression, and stimulates the activation of dopamine in the brain through signals sent through the vagus nerve.3 But the release of ghrelin in the gut also causes increased food intake. If you tend to overeat when you are stressed, ghrelin could be one of the culprits. 5

The blues and bacteria: 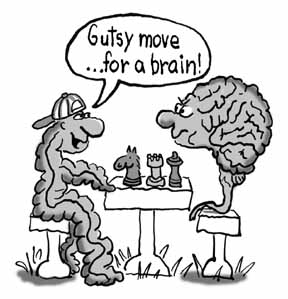