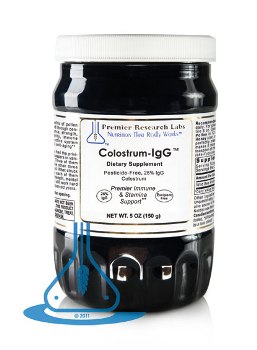 Pg. 17 preface: The true gems in the colostrums are Proline-rich Polypeptides (PRPs). These peptides modulate, balance, regulate or initiate indirectly most of the biochemical processes in the mammalian body. They are probably the most significant natural substances in the human body relating to the immune system.

Pg. 18 Introduction: It is not until the newborn receives the colostrums that the immune system is truly activated. Newborns that do not receive the gift of colostrums do not thrive and typically face more health challenges than newborns that are given colostrums.

Pg. 19: It has become clear that many of the substances in colostrum function as signal transducers that turn on or off different cell functions, particularly those of the immune system. Signal transducers are one way the body regulates itself by “talking” to the trillions of cells that make up the body. These signaling molecules are usually small peptides, polypeptides or proteins that have corresponding receptors on the outer membranes of their target cells.

One family of components in colostrums consists of very short peptides or poly-peptides. This family of peptides is characterized by having a greater frequency of the amino acid proline in their makeup than is normally found in peptides and proteins, hence the name Proline-rich Polypeptides, or PRPs. For years, scientists knew there was an unidentified substance in colostrums of very low molecular weight that could be filtered out and used to transfer immunity from one individual to another. It was called “transfer factor,” among other names.

Pg. 20: However, when you experience an infectious illness, such as a cold or flu, or if you experience an autoimmune condition, which indicates an over-active immune system attacking your own cells, then you need something stronger. PRPs are now available in a concentrated spray form that delivers maximum amounts of the immunomodulatory peptides to help modulate your immune system.

CH. 1: WHAT’S IN COLOSTRUM
Pg. 22: The placenta of the cow, however, does not allow the passage of IgG from mother to fetus. Therefore when the calf is born it is completely unprotected from infection and needs the IgG in the mother’s colostrums to survive. Thus bovine colostrums contains predominantly IgG (over 85% of total immunoglobulin) while human colostrums contains predominantly immunoglobulin A (IgA), which is designed for local immunity and is intended to help the newborn’s immune system handle infections locally in the gut rather than establish systemic immunity. IgG, because it can pass immunity to a specific pathogen (disease-causing microorganism) from one individual to another.

WHAT IS COLOSTRUM GOOD FOR?
Pg. 41: The best-known immune components of colostrums, of course, are the immunoglobulins, also known as antibodies. Immunoglobulins, part of the adaptive immune system, are special proteins produced by the body that can specifically bind virtually any bacteria, virus, protein, peptide, carbohydrate or cell that the body recognizes as “foreign.” Once the immunoglobulins attach themselves to the foreign substance (called opsonization), scavenger cells of the immune system can attack and destroy or neutralize it.

The immunoglobulins in colostrums contribute to its ability to neutralize or kill many bacteria, viruses, fungi and even protozoan parasites. Three proteins found in colostrums – lactoferrin, lysozyme and lactoperoxidase – part of the innate immune system – provide non-specific protection against bacteria, viruses and fungi.

Pg. 42: Lactoferrin is one of the main proteins in colostrums, making up about 6% of the total protein. Lactoferrin also has the ability to penetrate the cell walls of bacteria, which allows lysozyme to enter the bacterial cell, causing them to lyse, or burst. It also acts in conjunction with lysozyme to destroy Candida. Lactoferrin is a potent destroyer of viruses as well, including influenza virus, reparatory syncytial virus (causes colds in adults and severe bronchitis and pneumonia in children) and herpes simplex types I (cold sores) and 2 (genital herpes).

Pg. 43: A unique feature of colostrums is its ability to modulate rather than just stimulate, compared to immune products from plants that only stimulate. Colostrum contains a substance known as PRPs or colostrinnin, which has the ability to modulate the immune response by either turning up an underactive immune system or turning down an overactive one. PRPs can also induce the growth and differentiation of resting B Lymphocytes, an important part of turning on the immune system in response to a threat.

Pg. 47: A recent study showed the efficacy of a two-month treatment with oral colostrum in the prevention of flu episodes compared with anti-influenza vaccination. After three months of follow-up, the number of days with flu was significantly higher in the non-colostrum subjects. The study showed that colostrums used by both healthy subjects and high-risk cardiovascular patients was three times more effective that a vaccination in preventing flu and is very cost-effective. (111)

P. 68: Antibodies are produced by activated B cell lymphocytes (plasma cells). Each plasma cell secretes one class of antibody, and the antibody produced by a single plasma cell is of the same specificity. There are five classes of immunoglobulin that are recognized in mammals: IgG, IgA, IgM, IgE and IgD. The most prevalent class of immunoglobulin in all species of animals is IgG. In humans the IgA class is the predominant form found in breast milk and colostrums. The function of these molecules is to bind to invading organisms and to activate specific actions that help rid the body of disease-causing agents. They function in cell killing, inflammation, and prevention of bacterial and viral attachment.

Pg. 88: Proline-rich Polypeptides (PRPs) Peptides are sort chains of amino acids – the building blocks of proteins – without the complex tertiary structure of proteins. Proline-rich Polypeptides, so-called because they contain an unusually high proportion the amino acid proline, are intercellular signaling molecules that have the unique ability to modulate the immune system, turning it up when needed to fight an infection, or turning it down when it is overactive, such as in the case of immune disorders.

PRPs function as a hormone that regulates the thymus gland (the body’s central command for the immune system, and the gland responsible for the normal development of immunologic function in the body) stimulating an underactive immune system or down regulation an overactive immune system as seen in autoimmune disease (MS, rheumatoid arthritis, lupus, scleroderma, chronic fatigue syndrome, allergies, etc.). They have been shown to improve or eliminate symptoms of both allergies and autoimmune conditions. PRPs inhibit the overproduction of lymphocytes and T cells and reduce the major symptoms of allergies and autoimmune disease: pain, swelling and inflammation.

Chapter 8: Bovine Liquid Colostrum
Pg. 130: PRPs are powerful and very fast-acting immune signalers. In this capacity, they signal the immune system to upgrade its actions to fight infections, including those of viral, bacterial, parasitic and fungal origins. On the other hand, they can downgrade certain actions of the immune system that may become overactive, thus rapidly reversing symptoms of autoimmune diseases. In many disease states, they aid in stopping chronic pain.

Pg. 135: Dr. Keech had discovered a way to process fresh liquid colostrums that would ensure a very high content of PRPs. I always approach these kinds of seeming natural health breakthroughs with skepticism, but the scientific literature describing the benefits of PRPs was very impressive – an eye-opener to me.

I was pleased by how easy it was to use – simply spray beneath the tongue, hold there, and swallow.

Pg. 136: I also recognized early on that PRPs are most available in a liquid colostrums form. Here’s why: when powdered colostrum is swallowed, the gastrointestinal tract in the process of digestion destroys many of the active ingredients, including PRPs. On the other hand, when the liquid colostrum is sprayed into the mouth, held there, and swallowed, the PRPs are, for the most part, absorbed intact into the bloodstream early in the digestive process through the mucosa membranes of the mouth and esophagus. They are protected against digestive enzymes and acids that would otherwise break them down.

PRP is not actually a single peptide. Approximately 85 have been identified in bovine colostrum. Many of these PRPs are identical to those found in human colostrum. In the case of colostral PRPs, these peptides modulate the immune system.

Benefits of PRPs
Pg. 177: Now let us look more closely at the benefits PRPs provide.
PRPs are natural, microscopic molecules that are found in all animals. They are messenger molecules, passing information about the presence of an immune threat – whether externals or internal – and how to properly respond from immune cell to immune cell.

Pg. 178: PRPs do not elicit an allergic respo9nse and are not species-specific. What this means is that PRPs peptides produced by a cow are just as effective in humans as they would be in another cow. PRPs have been successfully used to treat the following conditions: viral, fungal, neurological and parasitic infections, malignancy challenges and auto-immune conditions.

PRPs are potent antivirals. Viruses are immune to antibiotics as antibiotics attack bacteria, but not viruses. PRPs are known to provide immunity to a number of dangerous viruses.

Pg. 195: Keep in mind that PRPs are not a magic bullet against a specific organism or disease. It appears to stimulate your immune system to action. In other words, it is a health maintenance product rather than a medicine.

Pg. 222: The institute for Colostrum Research is an organization dedicated to being a central information resource for consumers, health practitioners and researchers on the subject of colostrum and its components. The center is located in New Zealand, where the use of colostrum as a nutritional supplement is well established.

Growth Factors – by Michail Borissenko, Chief Scientist, Institute of Colostrum Research
Pg. 232: Colostrum is a very complex mixture containing many substances that have yet to be fully appreciated. Among these substances is a group of low molecular weight peptides collectively referred to as growth factors. Growth factors are hormone-like peptides that either act alone or in conjunction with other substances to affect the growth (proliferation) and maturation of various cell types. Epidermal Growth Factor (EGF) – Stimulates tissue repair and wound healing and manufacturing of the digestive tract in infants.

Improves Recovery
Physical exercise and training cause muscle damage. Recovery from this damage is necessary or subsequent exertion will be limited. Bovine colostrum has been shown to help in this recovery process.

Anti-Inflammatory Properties:
Associated with physical exertion and strenuous exercise if inflammation. In fact, at the Sydney Olympics the second most common medications taken by athletes were anti-inflammatories, surpassed only by vitamins.

Pg. 287: Colostrum and the International Olympics Committee
Colostrum is a completely natural substance that has been used as a food for hundreds of years. Everything in colostrum is also found in milk, although at a much lower level. As such, colostrum has been labeled by the IOC as being a, “strong” milk, and the IOC does not consider colostrum to be a prohibited substance. Further; bovine colostrum supplements are not on the banned drug lists of the IOC or any other sports governing body.