Premier Pregnenolone, along with these additional products, provides a foundation for healthy hormone balance! 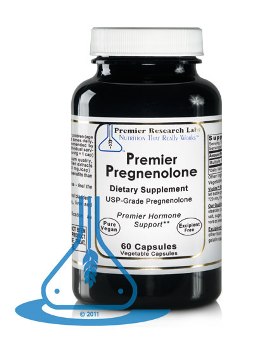 Pregnenolone, which is the raw material for producing many of the hormones of stress and adaptation, was known as early as 1934, but for several years it was considered to be an “inert” substance. A reason for this belief is that it was first tested on healthy young animals. Since these animals were already producing large amounts of pregnenolone (in the brain, adrenal glands, and gonads), additional pregnenolone had no effect.

In the 1940s, pregnenolone was tested in people who were sick or under stress, and it was found to have a wide range of beneficial actions, but the drug industry never had much interest in it. Its very generality made it seem unlike a drug, and its natural occurrence made it impossible to patent. Thus, many synthetic variants, each with a more specialized action and some serious side effects, came to be patented and promoted for use in treating specific conditions. The drug companies created an atmosphere in which many people felt that each disease should have a drug, and each drug, a disease. The side effects of some of those synthetic hormones were so awful that many people came to fear them. For example, synthetic varieties of “cortisone” can destroy immunity, and can cause osteoporosis, diabetes, and rapid aging, with loss of pigment in the skin and hair, and extreme thinning of the skin.

Natural pregnenolone is present in young people of both sexes at a very high concentration, and one reason for the large amount produced in youth is that it is one of our basic defenses against the harmful side effects that an imbalance of even our natural hormones can produce. In excess, natural cortisone or estrogen can be dangerous, but when there is an abundance of pregnenolone their side effects are prevented or minimized.

In a healthy young person or animal, taking even a large dose of pregnenolone has no hormone-like or drug-like action at all. It is unique in this way. But if the animal or person is under stress, and producing more cortisone than usual, taking pregnenolone causes the cortisone to come down to the normal level. After the age 40 or 45, it seems that everyone lives in a state of continuous “stress”, just as a normal part of aging. This coincides with the body’s decreased ability to produce an abundance of pregnenolone.

When aging rats are given a supplement of pregnenolone, it immediately improves their memory and general performance. Human studies as early as the 1940s, have also demonstrated improved performance of ordinary tasks. It is now known that pregnenolone is one of the major hormones in the brain. It is produced by certain brain cells, as well as being absorbed into the brain from the blood. It protects brain cells from injury caused by fatigue, and an adequate amount has a calming effect on the emotions, which is part of the reason that it protects us from the stress response that leads to an excessive production of cortisone. People feel a mood of resilience and an ability to confront challenges.

Many people have noticed that pregnenolone has a “face-lifting” action. This effect seems to be produced by improved circulation to the skin, and by an actual contraction of some muscle-like cells in the skin. A similar effect can improve joint mobility in arthritis, tissue elasticity in the lungs, and even eyesight. Many studies have shown it to be protective of “fibrous tissues” in general, and in this connection it was proven to prevent the tumors that can be caused by estrogen.

Pregnenolone is largely converted into two other “youth-associated” protective hormones, progesterone and DHEA. At the age of 30, both men and women produce roughly 30 to 50 mg. of pregnenolone daily. When taken orally, even in the powdered form, it is absorbed fairly well. One dose of approximately 300 mg (the size of an aspirin tablet) keeps acting for about a week, as absorption continues along the intestine, and is “recycled” in the body. Part of this long lasting effect is because it improves the body’s ability to produce its own pregnenolone. It tends to improve function of the thyroid and other glands, and this “normalizing” effect on the other glands helps to account for its wide range of beneficial effects.

The book this excerpt was taken from, and all of Dr. Peat’s books can be purchased by writing to: Raymond Peat, PhD, PO Box 5764, Eugene, OR 97405 USA