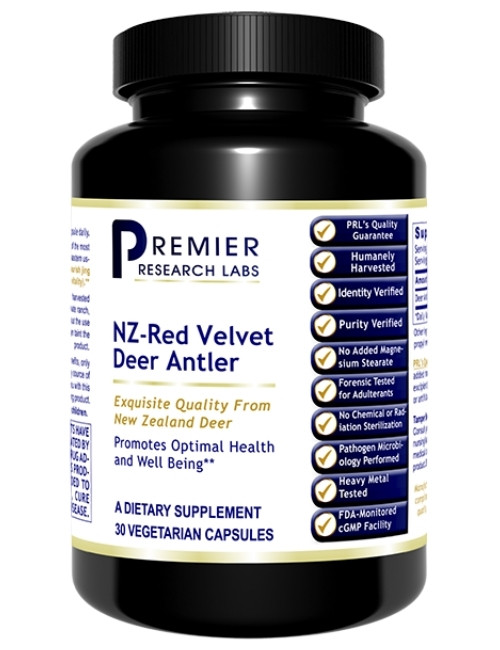 NZ-Red Velvet Deer Antler from Premier Research Labs is treasured as one of the most valuable agents in traditional Eastern health practices, used for centuries to nourish the body’s “jing” essence (defined as overall health and vitality).  According to these principles, velvet deer antler is considered  to be one of the most robust agents for this purpose.

Recent research has discovered that collagen is a natural constituent of velvet deer antler which supports the production of cartilaginous tissue and formation of the bone of the antler.  Collagen is a protein extensively documented for supporting skin health.

The bioactive compounds found velvet deer antler can vary dramatically, depending on harvesting and production methods.  The nutrient content of high quality, carefully processed, velvet deer antler contains a wide range of naturally occurring health factors that can be compromised with the use of high heat or added undesirable agents such as magnesium stearate or talcum powder that is commonly used during the production process. Our scientific team ensures that NZ Red Velvet Deer Antler meets FDA requirements for identity, purity, strength, composition while also testing for contaminants such as heavy metals (including arsenic, mercury, cadmium and lead) and pathogenic microbiology.

Scientific research indicates the minimum recommended daily dose of velvet deer antler should be 500 mg.  Beware of manufacturers that may try to cloud their label by claiming the product contains 500 mg when this weight may be the unprocessed weight of deer antler and may also contain an insufficient dosage because the total amount includes fillers or other additives. In contrast, NZ-Red Velvet Deer Antler offers 500 mg of processed deer antler per capsule that is equivalent to 1,500 mg of unprocessed deer velvet. Quite a difference!

Antler regeneration is a process unique to deer. In the wild, the male deer sheds its antlers each year.  For farmed deer in New Zealand, it is recommended that the velvet deer antler be removed in order to prevent the stags using them as weapons or damaging themselves and other deer as is common out in the wild. Because of the natural growth process, the velvet deer antler completely regenerates each spring and is considered a renewable and sustainable resource.

NZ-Red Velvet Deer Antler is unique in that it is humanely harvested on private ranches, Deer antler velvet is humanely removed using local anesthesia done by a trained specialist and is relatively quick and painless procedure designed to minimize stress for the animal. Once the velvet has been harvested, the deer are released straight back out onto the farm to carry on with their day..

NATURALLY OCCURRING COLLAGEN
Recent research has revealed that collagen is a natural component of velvet deer antler, which has been shown to support the production of cartilaginous tissue and formation of the bone of the antler. Collagen is a protein widely documented for supporting skin health.

Recommended Use: Take 1 capsule daily or as directed by a health professional.