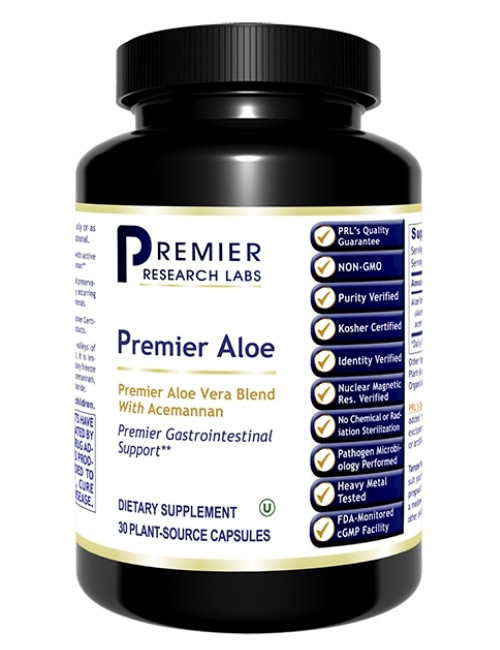 Acemannan - The Most Biologically Active Component of Aloe vera

Aloe vera is one of the oldest plants mentioned in ancient records due to its robust properties and health benefits. It is known that ancient Chinese and Egyptians used Aloe vera to address a plethora of health concerns. Premier Aloe features premier quality inner leaf Aloe vera that has been meticulously grown and harvested from the pristine countryside in Central America. At the time of harvest, it is immediately processed using a proprietary freeze-drying method to maximally preserve the short-chain, gastrointestinal supporting polysaccharide called acemannan, naturally inherent in aloe. When a fresh lot of aloe arrives at our facility for processing, our scientists begin testing by employing Proton Nuclear Magnetic Resonance Spectroscopy (H NMR) to execute an entire panel of laboratory tests on this raw material to make sure that it satisfies our internal testing criteria as well as meeting and even exceeding the FDA’s requirements.

The polysaccharide, acemannan, is predominately found in the inner leaf gel of Aloe vera and has been identified as one of the most biologically active and beneficial components in Aloe vera. Extensive research has now characterized its chemical structure to be rich in the monosaccharides, mannose, glucose and galactose, which count among the eight essential monosaccharides that play a critical role in many aspects of human nutrition and health.

The Essential Role Of Mannose In Human Health

Scientific research has demonstrated that the essential role of mannose in human health is specific to the body’s advanced mechanisms to extract mannose from the diet through its symbiotic relationship with probiotic microorganisms. Once digested, mannose is effectively metabolized at the liver, then secreted into the bloodstream and circulated throughout the body.

Our aloe product accesses the potent benefits of nutritional glycobiology of the Aloe vera plant which is an excellent source of glyconutrients. Acemannan (an acetylated mannan) is the key bioactive agent contained in the inner leaf gel of aloe. Research indicates that acemannan may support Immune modulation.

Science has reported that mannose’s biological activity is able to target cell-to-cell communication to promote healthy biological responses during times of stress. The body’s innate responses are regulated in part by glycoproteins (which have a carbohydrate attached by a covalent bond) or glycolipids (which contain oligosaccharides) chains that are present on the surface of the cells. These molecules promote cell-to-cell site activity that is critical to initiate favorable biological responses.

Acemannan and other polysaccharides have been extensively researched in Aloe Vera and are considered to be some of the most biologically active and beneficial components in the plant. By using advanced H NMR analysis, PRL scientists routinely examine the polysaccharide composition and also authenticate Premier Aloe for its naturally occurring highly beneficial acemannan content as well as other key components.

Currently, the only validated method for analysis of polysaccharide content is proton nuclear magnetic resonance spectrometry (H NMR). This method is able to detect and analyze biomarkers of undesirable degradation by-products of polysaccharides, such as acetic, succinic and fumaric acids. When these acids are present, it signifies the aloe has been compromised. In addition, if the aloe material has been exposed to excessive or prolonged heat, H NMR testing is able to identify whether formic acid is present - another highly undesirable compound that forms during thermal degradation of critical polysaccharides such as glucose.

With confidence, our scientists are able to verify that Premier Aloe has been tested by H NMR to avoid sources with undesirable degradation byproducts and also, that it contains a significant amount of naturally occurring acemannan with NO ADDED maltodextrin (which may have been used to artificially enhance the polysaccharide content).

To obtain the beneficial clinical results that practitioners desire, an aloe product that is “clean” and that has significant amounts of acemannan content is the most desirable.

Recommended Use: Take 1 capsule, 3 times daily or as directed by a health professional.