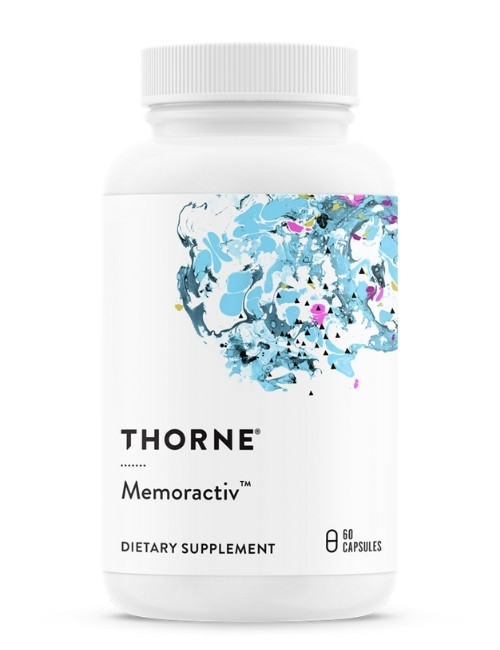 Memoractiv by Thorne is a nootropic for cognitive function, mental focus and visual health.

The ingredients in this unique formula support productivity, creativity, and mental focus, while promoting a feeling of well-being and helping the eyes filter light from blue screens.

Memoractiv™ is a unique combination of botanical extracts and nutrients that support cognitive function, mental focus, and visual health. The ingredients in Memoractiv are well studied and have been found to provide many cognitive benefits, including support for concentration, motivation, mental focus, and reaction time.* In addition, Memoractiv can enhance mood and wellbeing and lower cortisol levels to reduce the effects of stress.

And the addition of Lutemax® 2020 to the formula provides support for optimal visual performance by supporting the ability of the eyes to filter high-energy blue light – from laptops, cell phones, and other blue-light sources. Lutemax also supports visual function under bright light conditions.

Who can benefit from Memoractiv?

Lutemax® 2020 (Lutein, zeaxanthin, and meso-zeaxanthin) – supports visual function by increasing macular pigment optical density (MPOD) to help the eyes filter the light from blue screens. In a 6-month study in 2017, 48 healthy subjects who spent at least six hours daily in front of computer or other blue screens were given either 24 mg Lutemax or placebo daily. MPOD increased in the Lutemax group, as well as improvement in eye fatigue, sleep quality, and visual performance.

KSM-66® (Ashwagandha) – the highest concentration, full-spectrum ashwagandha extract on the market and the subject of numerous clinical trials. In a 2017 double-blind, placebo-controlled trial, 50 adults were given 300 mg ashwagandha (as KSM-66) or placebo, twice daily for 8 weeks. The ashwagandha group experienced improvements in sustained attention, information processing, and overall cognitive function.

PurEnergy™ (Pterostilbene/caffeine) – pterostilbene and caffeine are bonded to form a co-crystal, which provides a sustained-release, extended profile for the caffeine at a lower dose. Pterostilbene has been studied for cognitive function and healthy aging, while low-dose caffeine supports mood, wellbeing, alertness, and concentration.

Memoractiv by Thorne contains the following:

Recommended Use: Take 2 capsules one to two times daily away from bedtime or as recommended by your healthcare professional.